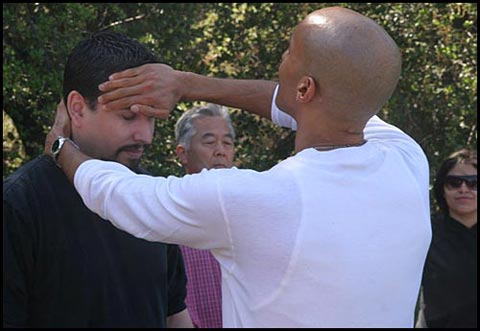 The transmission of the cellular plan is a bit like sending an email with an attached file – like an attached musical MP3 file.

We are made of billions of cells and each one of them is like a little electrical generator, which generates electricity. Our cells also radiate waves whether audible or not. Some scientists know how to render audible non-audible vibrations of the earth, the sun, the galaxies, etc. What is true in the infinitely large is also true in the infinitely small, of which we are composed.

In March of 2004, a researcher in the Department of Nanotechnology at the University of California in Los Angeles became interested in the sound that human cells emit. Thanks to a microscope with a tunnel effect (Atomic Force Microscope), he succeeded in finding, amplifying, and making audible the electrical vibration of the human cell.

Considering we are composed of billions of cells that emit sounds and that that ensemble makes a "symphony," we are then composed of a cellular symphony. This symphony's particularity is that each cell, contains a hidden treasure where the whole symphonic score can be found: It is the cellular plan present in the heart of the cell. Upon decoding this compressed file, we can playback the symphony of life with a new orchestra of cells, thanks to cloning.

The Raelian Message tells us that the area in the body where this "electro symphonic" score is the most reliable is in the frontal bone, very close to the area of the consciousness, as revealed to us by Maitreya Rael.

The person who recognizes The Elohim as our creators and Rael as their messenger approaches Rael or a Guide empowered by Rael. Rael or the Guide is at the service of the Elohim, or we could say that they are the "server" of the Elohim. They put their hands in water in order to make an electrical connection without interference. A hand is placed on the forehead and another behind the neck of the person. The hands of Rael or of the Guide serve to capture the vibration of the cellular plan (the magnetoelectric score). The vibration is immediately transferred to another server which is somewhere above our heads at 3pm on each of the four days of the year on which we gather to do these transmissions. The vibration of Rael or of a Guide is identified by this celestial server which serves as a supporting wave for the transmission of the cellular plan.

The transmission of the cellular plan is like sending an email (from Rael or the Guide) with an attached file (which is the person’s Cellular Plan). The Cellular Plan goes through a cosmic network (like an Internet or Intranet network) and is registered in the computers of The Elohim as coming from a person who recognizes Them as our Creators and Rael as their Prophet.